Remembering the past to construct the future

The Jesuit Guaraní reducciones (settlements), which developed in the heart of the tropical forest in Argentina, Paraguay and Brazil in the 17th and 18th centuries have for a long time been subject to controversies and admiration. Contemporaries such as Voltaire and later on the students of utopias considered them as social experiments close to the ideal model of society. During 150 years, within the very violent context of the American colonialization, the missions succeeded in establishing vibrant economies based on the unity of goods and production. These solidarian societies of the Guaraní were the first ones in the history of the world in reaching full alphabetization of the population. The arts, especially music, statuary and architecture, reached a very high level of sophistication, showing various mergers between the two cultures. During its heyday there existed 30 settlements with a total of 300,000 inhabitants. Five of these reducciones have been recognised by UNESCO as World Heritage sites, among them San Ignacio Miní (http://whc.unesco.org/en/list/275). San Ignacio Miní dates back to 1611 and is the most eminent example of a reduccion preserved on Argentinian territory.

Despite the fact that every settlement only comprised of one or two Jesuit fathers and between 5,000 and 10,000 Guaraní, the official history has always presented the Jesuits as the creators of these communities, as the protectors and the civilizing force of a people without history or their own capacities. The great protagonism of the majority of the indigenous Guaraní, their profound knowledge of their environment and their obvious creative support in all aspects of the development of the reducciones have mostly been ignored. Today there are only few remains left of the reducciones, and the contemporary Guaraní do not have a direct relationship to their ancient places anymore. 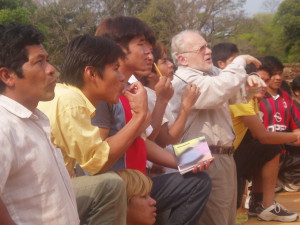 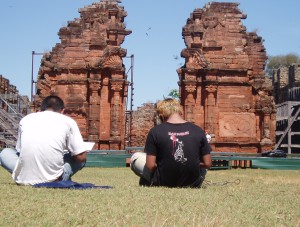 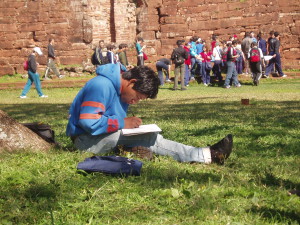 The purpose of this workshop was to give the opportunity to a group of Mbya Guaraní youth to reconnect with this heritage. The group comprised of 26 Guaraní from Argentina and two Guaraní from Paraquay. Working together during two weeks in September 2005 in the ancient reduccion and World Heritage Site of San Ignacio Miní, it was aimed to facilitate a space in which these youth could go back to “inhabit” this place, rediscovering the vital protagonism of their ancestors in the construction of this fascinating moment of history. During these days, the participants of the workshop tried to reconstruct the memory kept in the stones of the place, and afterwards, inspired by the example of the “elders”, began generating visions for the future of their own communities.

The workshop program also included a 3-day visit to Paraguay to explore the strong architectural influence of the Guaraní on the Jesuit reducciones and visit a Mbya Guaraní village there. This project was kindly supported by UNESCO’s Regional Office in Montevideo. 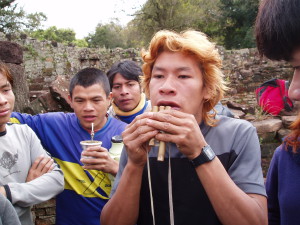 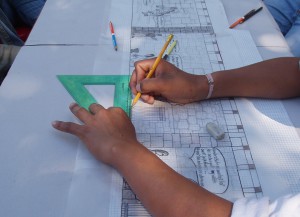 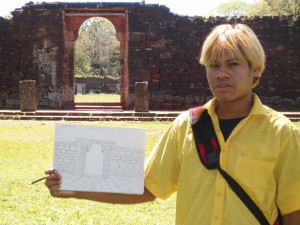 Damián Rodríguez (19): “Today, our generation has the responsibility to carry the load that our grandparents carried in the past. Through this workshop we have recovered our history. I am grateful to have been able to meet other young people who think as I do. And I have learned that we need to navigate these changing times using some elements of the white people’s culture in order to strengthen our own.”

Itatí Brizuela (25): “We know that it was very difficult for our elders, the Opyguá, to return to this place, because they suffered great losses here. For them, talking about that history was like reliving that past, like digging into old wounds. But by doing this, they gave us, the young, an opportunity to reconstruct that past which we can now use as a tool in our future struggles.”

Osvaldo Morinigo (18): “Remembering our past, I have learned that if all the Guaraní unite, we will be able to move the biggest boulders in order to build great works and move forward, just as our ancestors did. I have learned that the future existence of our people depends on what the young do today.”