The UNESCO biosphere reserve Oxapampa-Asháninka-Yánesha was declared in 2010 in the province of Oxapampa near the headwaters of the Amazon, in the transition zone between the high Andes and the tropical lowlands of Perú. An innovative approach of participative protected area management is bringing the different population groups of the region to the decision-making table, and has received considerable national and international attention. The region is home to the indigenous Yánesha and Asháninka, as well as to Andean settlers from the highlands and descendants of German and Austrian settlers, which came to the region mostly at the end of the 19th century in search of arable land. The population of the reserve amounts to 87,000 people.

The Yánesha are the smallest population group of the reserve counting 8 – 10,000 members. Their long settlement history in the region forms the basis for their strong ties with this landscape, whose landmarks give testimony both to their creation stories as well as to historic events and natural phenomena. The opportunities for young people to establish a livelihood in the region are however severely constrained due to the low prices for the agricultural products of the region such as coffee and cacao. Rural exodus is high and nearly all young people move away after finishing school to seek work in the nearest cities or find their luck in the capital Lima. 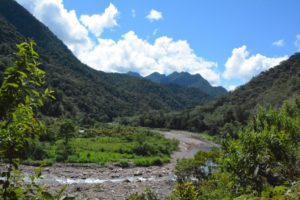 View on the Palcazú valley and the Chemillen mountain range 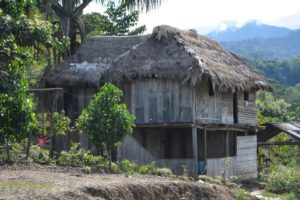 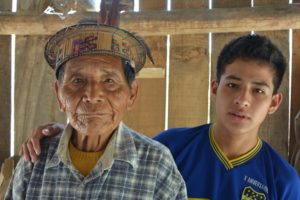 Several visits to the region and exchanges with representatives of more than fifteen communities revealed a strong interest by local stakeholders to raise the awareness of the young generation of their rich but threatened cultural heritage in order to make it more widely known via campaigns in schools and youth groups. Many of the village chiefs organized within the indigenous federation FECONAYA expressed a strong urgency for such work with youth on the culture and history of the Yánesha. 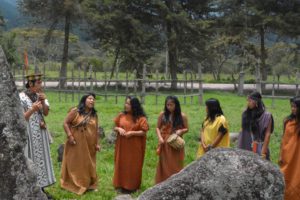 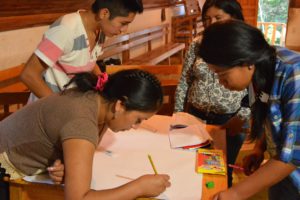 Visioning their territory in drawings 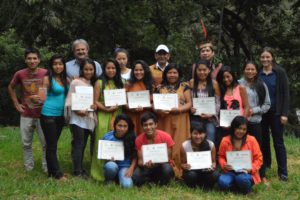 Responding to a request by the local authorities, OrigiNations thus implemented a week-long pilot workshop in October 2016 in cooperation with the municipalities of Oxapampa and Villa Rica and the indigenous federation FECONAYA. Twelve young people (nine Yánesha and three Asháninka) as well as two Yánesha elders participated in this event. During the workshop, topics such as the importance of their cultural and natural heritage, threats and strategies for its protection, as well as the role of the youth were discussed. One goal of the workshop was to develop statements for the conversatorium of the biosphere reserve immediately following the workshop. Five participants of the workshop took part in the „Segundo Conversatorio de Jóvenes de la Reserva de Biosfera Oxapampa – Asháninka – Yánesha“ and presented the video statements by the group.

Encouraged by the results of this workshop, the federation and the local authorities asked OrigiNations to continue supporting the youth of the region. Three further workshops were organised in May 2018, May 2019 and November 2019. These led to the formation of two youth groups: one in the Palcazú valley called “Etserra Wepanesha Antorare – EWA ” (Nuevos Jóvenes Líderes), and one called “Ewankari Ewankaro Kowiriasatzi – EEK” (Jóvenes Bermudenses) in the Puerto Bermudez region. Both groups are very active in the promotion of their cultural heritage and in supporting their communities. We are grateful to the Peruvian NGO IBC and the German foundation Nord-Süd-Brücken (with funds from BMZ) for their support of this project.

The following materials are available in Spanish: